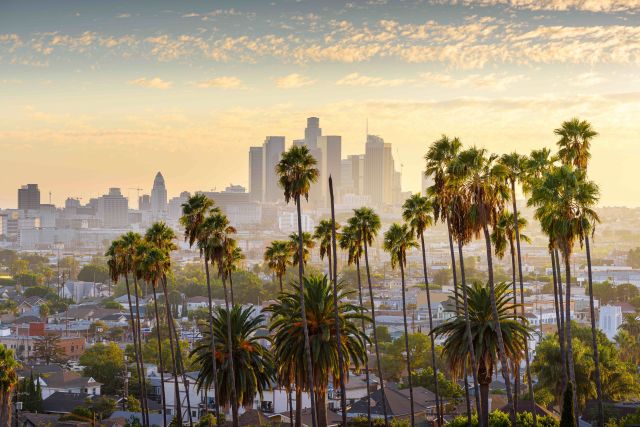 Travel in the USA: Adventures Close to Home

You don't have to jet off to Europe or travel to Asia to have a unique travel experience. Trek through the tall, winding passageways of the most beautiful national parks of the USA, experience the exhilirating drop at Disney World's Tower of Terror, jump into New York's famous nightlife, or surf the waves of Hawaii's Waimea Bay. No matter where you're based in the US (or where you've already traveled), there's always a new place in America to discover.

General Information for Trips Around the USA

Between Canada in the north and Mexico in the south, the US covers an area of ​​more than nine million square kilometers and has a width of more than 5,000 kilometers from east to west. In between you will find numerous stops with a serious wow factor: taller, faster, further, bigger—the US is a country of superlatives. Dizzying skyscrapers in New York, magical Disneyland outside Los Angeles, fabulous beaches on the West Coast, glamor, dazzle, and glitz in Las Vegas: it doesn't matter if you're a nature lover, city kid or adventurer, everyone will find something to love on a domestic vacation.

Where to Go on an American Vacation

South, east, or west coast? Or maybe you're hoping to drive cross-country on an unforgettable road trip? Let us introduce you to the most beautiful and popular regions of the U.S.

Loaded with tranquil beaches, bustling cities, scenic resort towns, and long stretches of coastline, the USA's East Coast is home to some of the world's most-visited sights. Discover New York with its spectacular buildings and famously inspirational atmosphere or drive along the coast of Maine, stopping for a lobster roll. In September, nature reveals its magnificent colors and you can drive through a snapshot-worthy red-orange landscape. Visit Boston's Freedom Trail or stroll through Portland, Maine, the mecca of the creative scene.

Discover Cuban culture during your vacation in Miami and take a deep into to see the coral reefs of the Florida Keys. With art deco architecture, sun-kissed beaches, and palm-fringed streets, the city of Miami draws millions of visitors every year. The southern state Florida is the gateway to the Caribbean, making it the perfect place for a beach trip. Explorers should head for the Everglades and the Keys, an island chain stretching 290 kilometers off the south coast— a must do on a Florida vacation. Florida also boasts some of the world's best theme parks including Walt Disney World, Universal Studios Florida, and SeaWorld Orlando.

There are many noteworthy sights in California, but the two most famous and popular California destinations are Los Angeles and San Francisco. To help you decide between the two (or consider a multi-city trip), check out our city guide to Los Angeles or our city guide to San Francisco. However, cities aren't the only thing the Golden State has so much more to offer. From national parks to cozy seaside towns, the possibilities for exploration are endless.

Between the bright lights of Los Angeles and Seattle you'll find abandoned towns with the sheen of the frenzied gold rush still on them. The national parks of the west attract thousands of tourists and enthrall visitors with mighty sequoias and seemingly endless gorges. National parks in the USA offer a diverse range of wildlife, canyons, mountains, and more. Yellowstone National Park offers numerous attractions to entice nature lovers, including hot springs, steaming geysers, hiking trails, and buffalo-filled valleys. Yosemite National Park is one of America's most-visited national parks, renowned for its stunning waterfalls, like Bridalveil Falls and Vernal Falls, and granite its rock formations. Can't decide where to go first? Don't worry! We've mapped out the perfect route for your tour of the West Coast.

Top Destinations in the U.S.

Vacations in the Great Lakes Regions

City Breaks in the US: From New York to LA

What's the most beautiful city in the US? It's hard to choose. Some love fast-paced New York while others swear by the sunny glitz of Los Angeles. Here's a quick look at some of the most popular cities.

A new adventure on every corner: New York is the city that captivates you by always being bigger, better, more exciting. Take in the One World Trade Center that, at 541 meters high, is the tallest building in the city, or the Manhattan streets that stretch for miles. Are you looking for relaxation in the middle of the bustling city? A stroll through Central Park will help you breathe easy.

And New York is more than Manhattan: walk through cozy neighborhoods in Brooklyn and admire the brownstones or immerse yourself in the creative scene in Bushwick.

Miami: Vacation Under the Palm Trees

Miami is a city of strong contrasts. Small cafes, cigar shops and Caribbean flair await you in Little Havana.Wander through the colorful Art Deco buildings of South Beach, where you will find a thriving creative scene as well as the best clubs in the city.

The cityscape is characterized by numerous historic buildings and monuments that give their own interpretation of America's political and military history. Stroll along the National Mall and past the White House to see iconic monuments dedicated to some of the country's legendary leaders like Franklin Roosevelt, Lincoln, Jefferson, and Martin Luther King, Jr. Be sure to get a peek at the White House and check out the recently opened National Museum of African American History and Culture.

Our pirate tip: You can enter the White House as part of a guided tour.

Los Angeles: In the Footsteps of Hollywood Stars

Tour through Hollywood, hike the Walk of Fame, and explore world-class museums: Los Angeles has an incredibly diverse cultural offering and countless hours of sunshine. Pay a visit to iconic studios such as Universal Studios, Warner Brothers, and Paramount Pictures to enjoy behind-the-scenes tours. Sunbathers should hit the beach, perhaps in Malibu or Venice.

In addition to some of the world's best casinos, Las Vegas has lots to offer. From award-winning restaurants, lavish pools, live entertainment shows, to unparalleled nightlife, the city has it all in terms of entertainment.